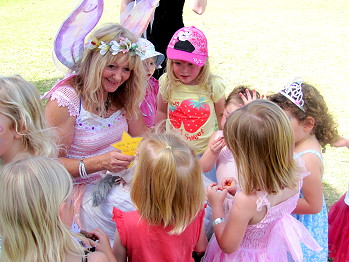 Gabrielle Shootingstar has a new site courtesy of Sibagraphics, incorporating a blog, to promote her facepainting and entertainment for children’s and adult’s parties, festivals, weddings and venues on the Sunshine Coast and throughout South East Queensland. Brighten up your next special occasion with a facepaint event with Gabrielle!

All Gabrielle’s services and products can be booked and ordered online.

Sibagraphics wholeheartedly endorses OneWorld’s new song “Freedom for Palestine” and the call from Palestinian people for boycott, divestment and sanctions of Israel until Israel respects international law, installs equal rights for all, ends its apartheid oppression and recognises the right of Palestinian people to return to their lands.

“Yesterday’s South African township dwellers can tell you about today’s life in the Occupied Territories… More than an emergency is needed to get to a hospital; less than a crime earns a trip to jail… If apartheid ended, so can the occupation. But the moral force and international pressure will have to be just as determined. The current divestment effort is the first, though certainly not the only, necessary move in that direction.”
– Archbishop Desmond Tutu, Nobel Peace Prize laureate for his work against apartheid in South Africa

“The so-called ‘Palestinian autonomous areas’ are bantustans. These are restricted entities within the power structure of the Israeli apartheid system.”
– Nelson Mandela

“For over 20 years Israel has expanded by force of arms. After every stage in this expansion Israel has appealed to “reason” and has suggested “negotiations”. This is the traditional role of the imperial power, because it wishes to consolidate with the least difficulty what it has already taken by violence. Every new conquest becomes the new basis of the proposed negotiation from strength, which ignores the injustice of the previous aggression. The aggression committed by Israel must be condemned, not only because no state has the right to annexe foreign territory, but because every expansion is an experiment to discover how much more aggression the world will tolerate.”
– Bertrand Russell, 1970

“No people anywhere in the world would accept being expelled en masse from their own country; how can anyone require the people of Palestine to accept a punishment which nobody else would tolerate?”
– Bertrand Russell, 1970

Superb and stylish, Mark and Bec from wedding band Echelon Grey add class and atmosphere to Sunshine Coast weddings. With a wide, flexible repertoire, the band’s delicious vocals blend perfectly with Mark’s accomplished guitar playing. Samples of their music can be downloaded from their site.

Our client Mark Paltridge of Spark1Studios tells us that there are two fabulous Toothfairies concerts on the horizon. Book early and don’t miss out!