To all our many clients and friends, we wish much happiness and prosperity for the coming year! If you look closely, in the foreground you will see a hungry green critter who shared the solstice season with us sheltering from the wet, enjoying christmas cake. 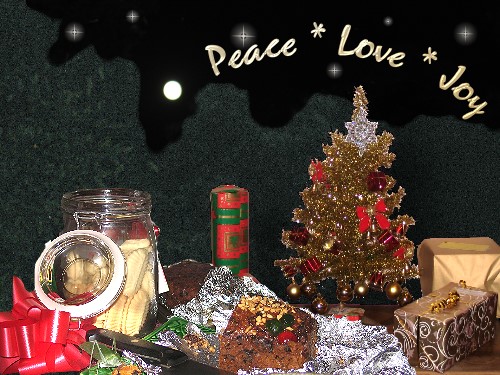 Select from a growing range of Sunshine Coast venues for your next holiday or choose a specific Noosa holiday accommodation option from Roamfree.

This year, we send our best wishes for prosperity and peace – it’s about time all of us had a bit of a rest from interminable bloodshed over resources, religion and global supremacy. Rather than using reason to develop a logical, secular code of ethical behaviour which considers the best interests of fellow human beings as well as their own, it seems too many humans depend upon crude instincts and irrational brutish faith to justify baseless feelings of cultural superiority and barbaric slaughter of and stealing from other humans.

To celebrate our alternative peaceful vision for enlightenment in 2007, we’ve made a desktop wallpaper featuring Ganesha, a Hindu deity symbolising intellect, wisdom and prosperity.

We’ve also taken the time to add some of our latest artwork and greeting cards to our online art gallery.

Not only have the beloved Socceroos ended their assault on the FFA World Cup, but this morning Spain was knocked out by France 🙁 The French recovered from their limp campaigns to date and Zidane carried the day. Till now, the Spanish team were playing magnificently and yet again as in the past, they were denied a strike at victory.

There’s much sadness round the traps that the Socceroos, who had managed to squeeze through to the second round despite a tumult of lousy refereeing, were chopped out by a disputed and very malevolent penalty awarded against otherwise complete hero Lucas Neill. Bresciano was amazing – looked like he was playing three positions. Why didn’t Hiddinck had put in Kennedy to replace Viduka? Viduka was no match for the Italian defence.

Next cup, I think the Socceroos will do even better – their performance this time will inspire much greater things in Australian football – once Aussies put their mind and effort en masse into a sport, they usually win sooner rather than later.

Looking for holiday accommodation in Noosa for your Queensland wedding and honeymoon? The Noosa Wedding Ring can recommend the best places to stay in Noosa Heads and Noosaville, close to beaches and restaurants. Featured in the holiday accommodation directory are On the Beach Noosa at famous Hastings Street, The Islander Noosa Resort and Villa Aqua Holiday Villas in Noosaville.

Noosa is the best place in Queensland for affordable, yet indulgent Australian holidays. With uncrowded long beaches for surfing and relaxing, a preserved natural beauty with unsurpassed diversity of flora and fauna, world class national parks close by, superb restaurants, eclectic shops and relaxed, friendly lifestyle, Noosa has an abundance of activities to offer international tourists and domestic visitors in search of a uniquely memorable Australian holiday experience.

With the Queensland State government’s irresponsible fire sale of South East Queensland to southern immigrants and developers who feast from the spoils of unrestrained growth, the latest shortsighted move is to foist the self-inflicted water shortage problems of the profligate, ever-expanding Gold Coast and Brisbane slums onto areas close to our heart – the Noosa/Gympie region.

This is the third attempt to dam the Mary River and I predict the exploiters will lose this time too.

Apart from the direct impact on prime agricultural land and 900 outraged landowners, the area is home to at least three endangered animal species, including the Mary River lungfish, Mary River turtle and Mary River cod, let alone representatives from our national treasure chest of plant species with their potential valuable pharmaceutical use. The region’s forests form part of one of the biodiversity hotspots identified by Professor Norman Myers. This proposed travesty of a dam at Traveston Crossing is also likely to impinge on the health of fisheries along Wide Bay.

And what about the region’s old cattle dips and their arsenic loads which will leech into the dam? Humans are the only species who don’t seem to mind poisoning themselves in the name of so-called ‘progress’ – the long term self-defeating result of suspect economic irrationalism which relies ignorantly and unquestioningly on increase in population and production for prosperity. Prosperity for whom? our children’s children? I don’t think so.

No more dams! There are plenty of other more sustainable, responsible options to address water consumption needs in South East Queensland.

For more information, visit the Save the Mary River site, NUSER and the Sunshine Coast Environment Council.

It’s not often I feel compelled to add quotes from a priest to my blog, however Father Peter Hansen, the parish priest at Our Lady’s Church, Craigieburn, affected me profoundly with his homily to Caleb Nguyen Tuong Van.

“There are some voices – I believe no more than a minority – who call for vengeance and retribution, because of what Van had done. But these voices belong to people who do not understand the fundamental truth that human beings can change, can move from a life that does harm, to one that does good. I say to these people, if you build a world upon the so-called values of retribution and vengeance, then you will build a world in which some people will always seek to take drugs, because you will build a world of such unbearable harshness that people will do anything to escape it. But if, instead, we build a world based on values of tolerance and forgiveness, on remorse and atonement, on compassion and mercy, then we will be building a world which has no need of the culture of death, which heroin, like capital punishment, represents.”

I’d include some large pharmaceutical companies, the legal drug dealers, and their political pushers who often have direct financial interests in them, as part of that culture of death as well. Perhaps it is not surprising then, that it seems to be those same politicians who also peddle the ‘necessity’ for capital punishment and other abhorrent means of social control.

Last Christmas season, some good friends, my husband and I had a magnificent extended lunch at Ninderry Manor around the pool. I’m recording the menu to jog my memory in times to come as to just how wonderful Aki’s cooking and the occasion was.

To treat ourselves, we imbibed several bottles of Moet et Chandon … a perfect day!

Results of the ENABLED survey on web developer usage and knowledge of designing sites accessible for the disabled are now available.

58% of respondents were not aware of the Web Accessibility Initiative, and only 36% attempt to make their sites accessible. I’m not surprised, because to do so requires gaining knowledge and skills way above the use of a WSIWG program.

Two new prestigious accolades have been awarded to the Sibagraphics site … Tim’s Spider Merit Award and Invision-Graphics 2005-2006 Award. View these and others in the Sibagraphics awards section.